Fill out my online form.

As underground utilities begin to wear down and leak, eroded soil can create voids and reduce the soil’s load-bearing capacity, potentially causing roadway failure. With polyurethane injections from Stable Soils of Florida Inc, we can quickly repair settlement, leaks, and fill any voids without excavation or disruption to everyday traffic!

With budget cuts weighing on every manager’s mind these days, Our Poly Injection repair process is a viable option to save valuable infrastructures and budget dollars for uses in other areas. When compared to rip-out-and-replace options, ours is incredibly less expensive. And because our material is guaranteed against defects for 10 years, you can be assured that when the job is completed, it will remain worry-free for many years to come.

Stable Soils of Florida Inc has over 30 years of experience in roadway repair! Contact our geotechnical construction company to schedule a free inspection!

The Perfect Product For Your Repairs

QUICK, EASY, NON-DISRUPTIVE and READY TO USE IN A COUPLE OF HOURS… NOT DAYS! 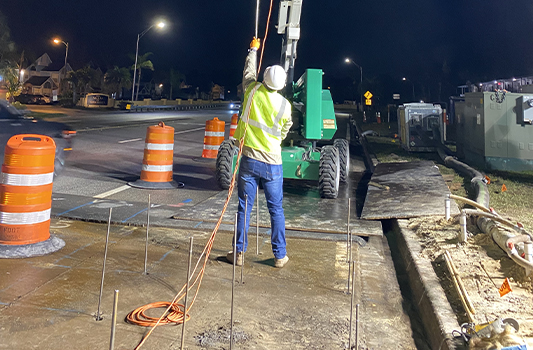 The Perfect Product For Your Repairs

Poor base and subgrade soils can wreak havoc on a roadway, causing various issues such as cracking, rutting, and severe pavement settlement. The root of the soil degradation could be caused by the following. 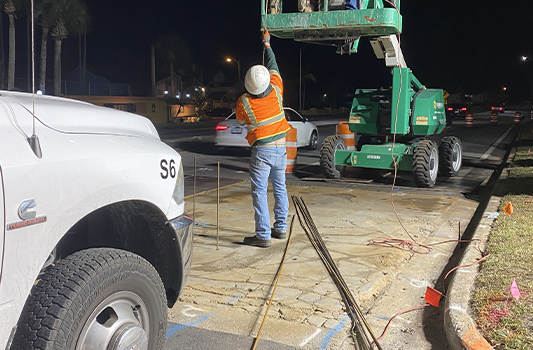 Weak soil, which can lead to the formation of voids beneath the pavement, can result from natural and man-made causes, for example, if the original soil composition had loosely-packed materials that were not packed well before construction. No matter the cause, if these road settlement issues are left untreated, they can negatively affect pavement systems. Common problems that arise on roads and highways include broken or separated concrete slabs, faulted joints, subsurface voids, and sloping or inconsistent pavement levels. 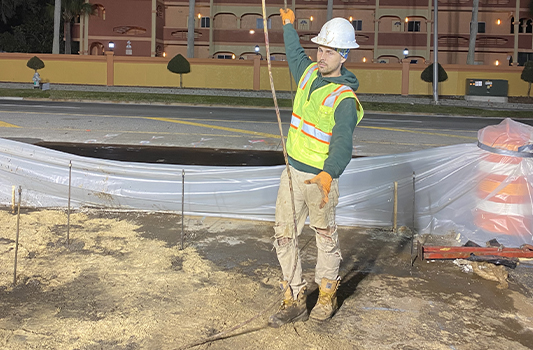 FDOT, Departments of Public Works, Airport, and other transportation authorities use a wide range of repair methods to maintain their roadways, which include the following.

Asphalt is the primary material used for roadways due to its reduced cost and flexibility. Hot asphalt is spread over the existing surfaces to repair uneven surfaces and pavement settlements, but how thick the asphalt is will be depends on the condition of the base soil beneath the roadway. If the condition of the base soil is poor, weak, or unstable, the repair will be more likely to fail.

Pressure grouting uses a mixture of water, soil, fly ash, and cement injected under the pavement to fill voids and support any damaged areas. Unlike, Stable Soils of Florida Inc’s polyurethane grout, pressure grouting material has a slow cure time, shrinks, and lacks the strength to support the road for the long term. Similar to the weight of concrete, pressure grouting can add extra weight to an already weak soil condition.

Removal and replacement can take weeks or months to complete. Traffic must be re-routed to repair the area. 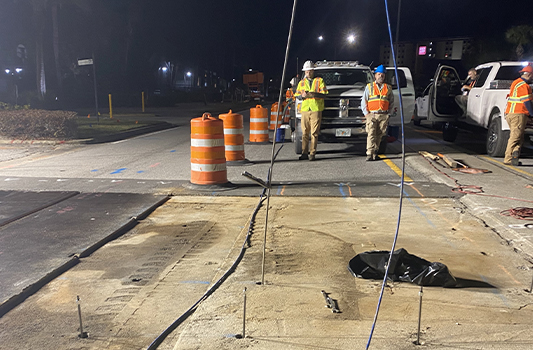 To increase the load-bearing capacity of the road, Stable Soils of Florida Inc injects structural polymer into small holes drilled through the pavement structure. This material easily flows into voids and weak soil zones and quickly cures into a strong, non-toxic, water-resistant material that lasts for years. Below, we have listed some roadway repair applications! 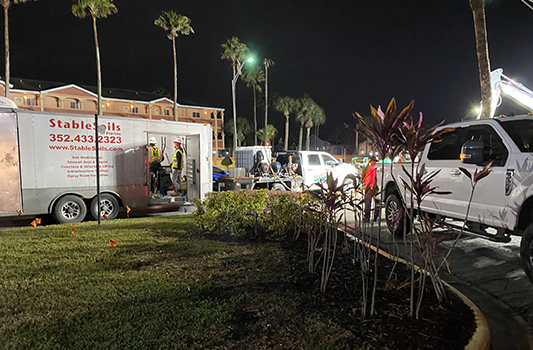 Stable Soils of Florida Inc helps to stabilize roadways and prevent further settlement through undersealing and void filling! With a combination of sealing and a rapid cure time, we can quickly make repairs and have you back on the road.

One of the best ways to stop recurring problems is to seal joints and cracks from water leakage and seepage. If these are left untreated, these cracks can cause further damage and settlement problems! Through our polymer injections, we create a strong, reliable seal!

Florida is no stranger to heavy rains! But this, along with temperature shifts, can create fissures and voids, which in turn can cause potholes, sinkholes, and cracking that can weaken pavements. Using our hydro-insensitive polymer material can drive out any standing water and fill voids while adding density to the soil.

Responsive, reliable and professional executing all projects on time and adhering to budget limits.  We have a very good working relationship and are very satisfied with the overall experience that we have had working with their personnel.

After the pre-work meeting, the contractor engaged with the department as a team, working hand in hand with our District, GeoTech staff and local departments.  The contractor went above and beyond their normal work hours to meet the deadline.  Their staff was friendly, courteous and accommodating.  Thank you for a job well done.

Proudly Serving All of Florida